I have been terrible about posting my meal plans – but they’re so handy to look back on and if I inspire one person to start meal planning and budgeting then it’s totally worth the effort.  It also helps me remember what we had from week to week, and I can absolutely go back and mark out new things we tried that we either liked, felt “meh” about, or hated.  It’s good to have a reference point. 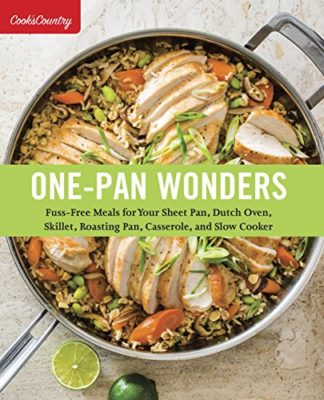 So this week is pretty standard – nothing too crazy – trying 2 new recipes – a Oricchette Pasta with Sausage, Kale & White Beans dish from my Cook’s Country (America’s Test Kitchen) One Pan Wonders Cookbook

and a Chicken and Broccoli Stir Fry recipe from Dinner At The Zoo.  Since we’re almost to the end of the week, and I’ve been horrid about getting this posted, I can report that both recipes were REALLY good, but I’d recommend low-sodium soy sauce AND chicken broth for the stir fry – mine ended up a tad salty.  Not inedible, and it was fine for my, but hubby said “Salty” and cleaned his plate….. so take that as you will.

Sunday, Jan 31, 2017 –  Oven Roasted Pork Chops & Hassleback POtatoes with Onions & Mushrooms.  I made this one up, but I have to say I LOVE hasslebacking potatoes because they cook faster and you can spoon tasty stuff down between the slices.  Yum.

Monday, Feb 1, 2017 – Simple breakfast night – just some French Toast (which i DO NOT EAT) and Bacon.  My hate-affair with french toast didnt start until adulthood, but eggy soggy bread with scrambled eggs smashed into it…no thanks.  Hubby & the boy love it though.

Tuesday, Feb 2, 2017 – Oricchette Pasta with Sausage, Kale & Cannellini Beans.  This was from the Cook’s Country cookbook and was excellent.  Hubby REALLY liked it, even though he picked out the kale a bit.  He ate some, picked some out.  I pick my battles.

Thursday, Feb 4, 2017 – Chicken & Broccoli Stir Fry.  I really liked this recipe and thought the mushrooms in it were EXCELLENT.  Boy and Hubby both hate mushrooms so there was whinging.  I ignore it because mushrooms are easy to pick out and I made them french toast this week.  They can suck it up for 1 night.

Friday Feb 5, 2017 – That’s tonight, because i’m really late with this blog post.  Tonight I’m making a Chicken Enchilada Soup recipe I haven’t tried before.  Boy and Hubby both like Chili’s version – but all of the copycat recipes I’ve found call for VELVEETA. Sorry, not a convenience food I approve of…so found a different version at Like Mother Like Daughter.  Hopefully it goes over well.

Saturday Feb 6, 2017 – We’re going simple with leftover soup and grilled cheese to extend it a bit in case we don’t have too much leftover.

So this is our menu for the week? What are you having/did you have?  Share your trials and tribulations and let me know if you’ve got any ideas for things that would fit in with our “groove.” 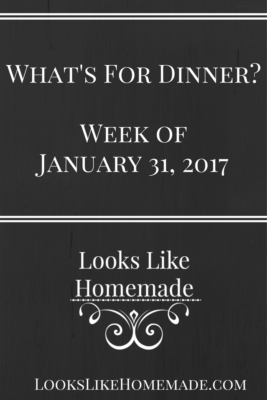