The lack of posts recently means I was busy – busy on VACATION!  Todd and I took the kids on a road trip from here in Western Colorado up through Flaming Gorge and into Grand Tetons and Yellowstone National Park. 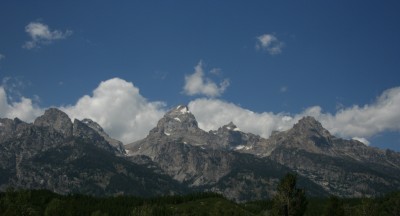 We had a great time, it was a whirlwind trip spanning 5 days with lots of stops for photos and potty breaks.  Luckily in a national park, most of the photo pull outs also contain some semblance of a bathroom.

Flaming Gorge was a bust as far as I’m concerned.  We only could go up ONE side as it was on our up trip itinerary, so we picked the West side.  It was boring – and flat – and boring.  I might suggest the East side to anyone driving up that way.  Also – dont expect too much from Wyoming when you’re not in the Tetons or Yellowstone – this was my facebook status on our way home yesterday: 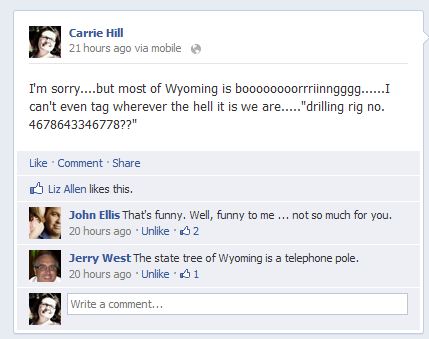 Tetons were amazing, as usual.  I just love it there.  We saw some great scenery, some elk, and this adorable Momma moose and her TWINS!  She was actually posing for the cameras, and turned around and all of a sudden here come her babies out of the willows.  I took this picture with my phone – so it’s a little overexposed. 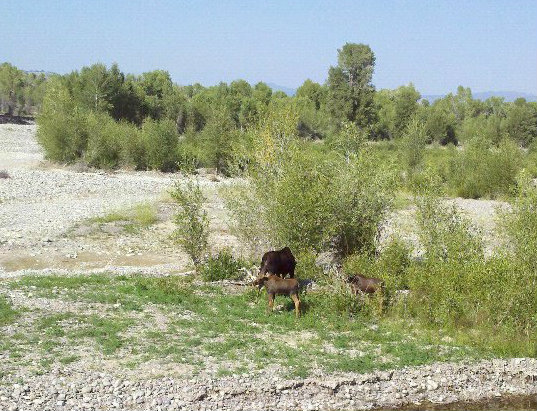 We went into Jackson a few times.  We had a really good dinner at Snake River Brewery.  It was REALLY REALLY loud and busy in there, if you want a quiet spot, this isn’t it.  My favorite meal was at a cute little pizzeria called Pizzeria Caldera.  I had a really tasty Caprese salad and Maddie and I split their Quattro Stagioni Pizza.  It had Mushrooms (sauteed not raw), artichoke hearts, Kalamata olives, Mozzarella cheese and Prosciutto – it was amazing.  The Kalamata Olives really made the pizza.  I’m going to make one with Pesto, Kalamata Olives, Feta, artichokes and Italian sausage.  They have a stone hearth oven, I might get something similar to the same effect with my Pampered Chef pizza stone….MAYBE.

Maddie and I went on an amazing 1/2 day horseback ride through the moutains near the Heart Six ranch where we stayed.  I highly recommend the rides here.  The lodging was okay, but they’re actually two ranches combined, with vastly different lodging options.  If you reserve, make sure you ASK SPECIFICALLY for a Heart Six cabin, not a Buffalo Valley cabin.  There is a reason the Buffalo Valley website only shows interior images for most cabins.  The front of the cabins looks like the ghetto – I’m talking scary Bates Motel joint you wouldn’t even stop at and ASK if they had vacancy.  No stain, railing falling off the porch.  There were dirty underwear under the porch when we pulled in and weeds all over.  This was part of our view off the front porch.  Awesome in one direction, awful if you made a quarter-turn to the right:

Blah – not so great.  It was pricey at $240 a night, but that’s what it ran for pretty much anything in the area, and things book up in advance so we were stuck.  The cabin INSIDE was nice, but the outside was scary.

Our wrangler for the horseback ride, Andrew, was amazing and I learned a lot about the flowers in the area.  I wanted to take flower photos but it’s really hard to do from horseback, and I was way to lazy to stop and get on and off, and it was an enjoyable ride.  Here Maddie and I are at the top of the mountain behind the ranch – with the Tetons in the background.  My horse’s name was Wayne – he was a bit of a pill, but have a little riding experience so we got along fine.  Maddie’s mare was named Martha, and was a real sweetheart. 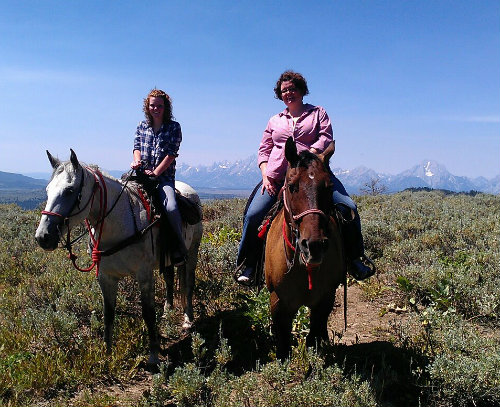 On Sunday we hit Yellowstone. This was a lot of fun.  We saw some great wildlife and views, along with A 90+ minute wait for Old Faithful to erupt – it was worth it, even though I wont tell Todd that.  All in all a great trip.