I am a really REALLY big fan of one dish meals – in fact a recent Christmas present was a cookbook of one-pan dinners – from slow cookers to sheet trays and dutch ovens.  Really great for weeknight meals and easy clean up when you’re not really into doing a bunch of dishes.  This chicken veggie tray bake recipe if definitely one to put in your repertoire.

I generally get 2 chicken breasts and butterfly into thinner pieces – they cook faster and it’s more of a realistic portion size.  You can do fresh green beans, cauliflower or broccoli if you want in place of the Brussels sprouts – we like Brussels sprouts though.  I also use russet potatoes, but halved baby reds work too… really this chicken veggie tray bake recipe can be whatever you have in the fridge.  If you use broccoli or cauliflower, add it in the last 15-20 minutes of cooking because they cook faster than Brussels sprouts do.

They key to the veggies is to be sure they’re uniform size! 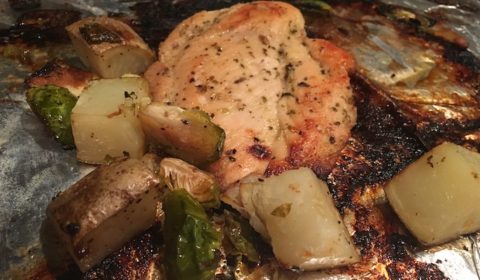